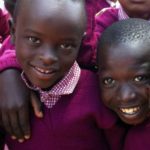 The St. Charles Lwanga School in Kibera, a slum of Nairobi, Kenya, aims to rehabilitate and develop children in special circumstances from the streets or out of school due to socio-economic & psychological factors, through non-formal, vocation training, and community interventions based on values of charity and love.

The School has three main groups of beneficiaries:

The school offers access to primary education as well as to a multiplicity of vocational programs for high-school aged children. The latter include, but are not limited to, motor vehicle & electrical installation trainings as well as hairdressing & fashion trainings.

In 2014, the School reached directly 550 people, of whom 300 were children (166 girls and 134 boys), 200 youths (130 females, 70 males), and 50 teenage mothers. Indirectly, the School reached 2,750 people, most of whom were family members of the beneficiaries, through sensitization and economic empowerment programs.

Through the sensitization initiatives, the students’ parents, guardians, and caregivers are informed about key issues of importance for child protection, such as getting birth certificates for school registration, as well as for their community, including drug abuse and mental health. The economic empowerment activities focus on training parents to develop business skills & management, forming groups for savings & credit, and accessing various types of funding from local banks.

In 2014, the St. Charles Lwanga School was able to continue offering learning materials for its students, including text books, exercise books, and uniforms. These materials are often very expensive, preventing many children from enrolling in school and forcing others to drop out. A ten-year-old student from Campus International School at Cleveland State University in Cleveland, Ohio, conducted a pencil drive on his campus on behalf of the school.

The pencils were collected by the founder and manager of the School, Brother Hillary Kazoora, who collected them during Namaste! One Night for One World, held during the IPM General Assembly in October 2014. The numerous new pencils will enable the Kenyan students to further their school endeavors and boost their creativity.

Last year, with the financial support of IPM, the School continued offering a breakfast and lunch program to the vocational students and those in primary school, while increasing the food’s nutritional values. Apart from providing the students with the energy necessary to be focused and successful in school, the meal program represents a key incentive for them to remain in school, as they might otherwise not be able to eat anything during the day.

With IPM’s assistance, in 2014, the School ensured that all students at the St. Charles Lwanga were dewormed. On the short-term, this will enable students to attend school and focus on their work, without having to worry about the state of their health. On the long-term, this procedure will ensure that the children are healthier and, by preventing their absence from school, might contribute to reducing the school dropout rate in the slum.

The School would like to complete the building of a vocational school for girls in Eastlee, on the other side of town, to increase the number of females entering the motor vehicle repair & electrical installation classes at St. Charles Lwanga. Many girls have expressed that they fear being taunted or teased, by being in a class almost entirely made up of boys. The location of the new building will allow females in Dandora and Mathare Slum to enter the Vocational Training Center.

The Center would be three stories high, with the second and third floor being made up of classrooms. The first floor will be divided into a variety of service shops, such as a mechanics shop, electrical store, and a small carpentry store, all run by students, who have completed their vocational training at the School, given that job opportunities remain scarce. At the same time, St. Charles Lwanga would like to expand the internship opportunities available for its students, by working with national and international corporations, based in Nairobi.

Finally, the School would like to involve IPM in organizing a Career Day for its students of the Primary School, in classes 6-8. The idea would be to have numerous male and female professionals from a variety of backgrounds carrying out various jobs or income-generating activities to share their work experience with the students.

The goals for the Career Day would be threefold: