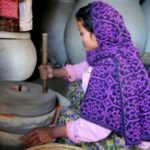 This project supports women in a micro-enterprise initiative of calendar making. The women have discussion groups to decide on the themes that will be displayed in the Calendar. The calendars are then distributed to women in the community and each month of the calendar has a positive message regarding women’s empowerment, health, and other topics.

The Social Work Institute supports several local project partners involved in education, agroforestry, health care, women’s issues, and the environment. The main program currently run out of the Social Work Institute is the Calendar Program which uses the production of calendars to raise issues that women and other individuals in the community may be experiencing in their daily lives.

While based in Kathmandu, affiliates of the Social Work Institute working with the Calendar Project spend 80% of their time in the rural community, serving as a resource across gender & socioeconomic barriers since 2002.

As a direct result of the women’s participation in the Calendar Project, income-generating activities have increased and enrollment in school among primary and secondary school-aged children has increased. As reported in March of 2014, 2000 women are involved in the project across seven districts in Nepal.

The program was developed to fill a need for personal development in Nepalese women, and subsequently, a need for stronger voices for social change. In Nepal, socio-cultural gender norms dictate that decision-making is done by males. There is little opportunity for women to participate in social or political activities. The Calendar Project fuels community discussion and builds confidence in women by providing a space and infrastructure for weekly community meetings, where items of importance to the Project Partners are vocalized and added to the community calendars. In this way, the calendar becomes a vehicle through which the women can mobilize local resources, and gain invaluable leadership and collaborative skills.

Furthermore, each calendar is contextualized in a theme as determined by the Project Partners. Items of focus often include personal responsibility to one’s community, the power of unity and solidarity for peace and justice issues, and the appropriate allocation of economic growth, among others. As an example, in the 2014-2015 calendar, some of the themes include: Practice Constitutional Rights, Identifying Personal Roles & Responsibilities, Power through Unity & Solidarity.

Resmi Chaudhary, a 26-year-old woman from Kailali District, is one of the beneficiaries of the Project. Resmi was married to a man with a drinking & gambling problem, who often fought with her in front of their children. She came to the discussion group implemented by the Social Work Institute in her village, where she learned how to have productive conversations with her husband. After four months, she convinced him to stop drinking & gambling and to focus on providing for his family.

Another participant in the project, Duthan Devi Rana, adds that, through the discussions, she has learned business planning and invested in a goat initiative, which allowed her to increase her family’s income and solve some of their financial problems.

Finally, Chandra Joshi, was helped by the group discussions to find out what her rights were and how to ensure that her husband respects them. When he took on a second wife, her husband started being abusive towards her. He started beating her, prevented her from entering the house, and forcing her to sleep in the cow-shed. He also refused to give her any support and filling the citizenship application for her, which, according to Nepali law, needs to be signed by the husband. With the help of the calendar group, Chandra visited the Village Development Office, which forced her husband to sign the citizenship certificate, allowing her to divorce him and obtain some property.

The Project is aiming to expand the socio-economic topics addressed in the Calendar Project as well as the resources available to the participants. It also aims to increase its community outreach and number of discussion groups held in villages around the country throughout the year. At the same time, the Social Work Institute would like to increase and strengthen facilitators’ skills through additional training, as well as boost the leadership skills of those participants who will lead discussions in their own communities. Finally, the Calendar Project aims to continue empowering communities to find solutions to their own problems and situations.

Find out more at the Social Work Institute’s website.