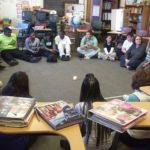 This program, in response to violence in the St. Louis Public Schools, is teaching students to communicate their needs in a non-violent and effective manner. This is done through the use of circles where the victim has the opportunity to have a voice and the offender has an opportunity to repair the harm that was done.

Through the support circles the victims have an opportunity to address their offenders, while the latter can repair the harm that they might have done. The program is implemented on every level of the school; with administrators, students, teachers, and the community. Several additional schools districts and adult courts in Missouri have implemented the programs of The Restorative Justice Project, including 16 juvenile courts.

The program also continues to include a peer program, through which high school students are trained to engage students in the eighth grade in discussion groups and develop skills that might be transferable to a career, such as counseling, social work, and teaching.

These trainings are developed for students with more chronic behavioral issues, with the groups being separated by gender, mostly with sixth grade boys and seventh grade girls. The curriculum focuses on four questions that the students examine about their own behavior or actions: “What harm did my actions cause? Who did they harm? How can that harm be resolved or changed? Who is responsible for repairing it?” This particular program is rooted in the idea that our actions have consequences and that even though those consequences are sometimes unintended, they still need to be examined as do their effects.

The Project would like to be able to provide training resources that prevent initial school misconduct. At the same time, it is looking to provide the ‘peer leaders’ a small stipend to encourage their efforts and gain additional funds for team-building in the ‘peer leader’ groups.