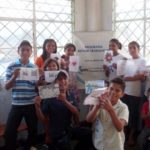 Region: Latin America and the Caribbean

Over one million Colombian children with ages between 12 and 17 are estimated to work in multiple fields, but primarily in agricultural activities and street work.

Due to their family’s economic circumstances, many children are forced to abandon their right to a primary education, so that they can enter the workforce to help support their families. Children who are victims of child labor are not only robbed of a primary education, but they are also more susceptible to leading lives of violence as they grow up.

Children are also forcibly recruited by non-state armed groups. In 2013, Colombia made significant progress in eliminating the worst forms of child labor, by expanding the number of beneficiaries of its social protection program, More Families in Action, from $2.6 million to $3 million, and by establishing an inspection unit in the Ministry of Labor to combat child labor. Nevertheless, more work needs to be done.

Niños Trabajadores (Ibagué, COLOMBIA), Spanish for ‘Working Children,’ complements the government’s efforts by providing education & outreach to children who must work in the local marketplace during the day, in order to support their families. Additionally, Niños Trabajadores provides drug & alcohol abuse prevention programs, as well as opportunities for the children to learn, play, and share with their peers, who are in similar situations. The project works with parents, too, encouraging them to send their children to school and informing them about the importance of education. Some of the mothers are involved with IPM’s other Colombia-based Project Partner, Women’s Community Project/ SER MUJER. Martha Cecilia, the project coordinator, connects parents with training and income-generating opportunities. Currently, Niños Trabajadores serves 25 children directly and 60 people indirectly, including parents.

Through IPM’s support, in 2013, a reading & writing composition workshop was developed for children with reading and writing difficulties. It thought children fundamental skills for their school work. However, the profound influence that the Project has on the community extends far beyond striving to improve the children’s academic. Niños Trabajadores regularly hosts movie nights for the children, since many of them do not have access to or the financial means for this type of entertainment. The movies are chosen to promote values of love, solidarity, respect, friendship, and listening.

With IPM-funded materials, the Project has also facilitated artistic workshops, emphasizing the importance of teaching children how to productively use their free time in an effort to prevent them from partaking in dangerous activities, such as violence or the use of drugs. These workshops also help the children explore their individual creativity. The key themes pursued have been self-esteem and respect within the group.

Niños Trabajadores promotes additional recreational activities that allow the enjoyment of games, friendship, and solidarity among children. These include three IPM-funded recreational outings with the children to a swimming pool and a cinema, which are places that they usually cannot attend, due to their parents’ lack of financial resources. With the help of IPM funds, the Project also organized a children’s party to celebrate Children Day in October and intends to do a similar event for Christmas.

The Project also encourages the children to be actively engaged citizens. On June 12, 2013, the Niños Trabajadores team celebrated the World Day Against Child Labor by marching around the city downtown.

The children have amply benefited from being part of the activities that they attend. One of them, called Maria Jose, who has been with the project for two years, emphasized that the Project allows her to share with other children, play, paint, and learn how to be supportive. In turn, another student, Ferney Flores, who has also been involved for two years, revealed that he wants to be a teacher and that being involved in the project helps him to learn, because he shares with friends, listens to them, and learns respect.

II. The Committee for Prevention and Eradication of Child Labor

In 2013, the Project became an official member of the Committee for Prevention and the Eradication of Child Labor, and has been actively participating in the meetings of their local chapter. In the next few years, they are working towards developing ways to involve and inspire leadership among the children in local and municipal participation. They are striving to work more in partnership with the government agencies that have an impact on child development.

One of the Niños Trabajadores’ constant challenges is keeping the participating children accountable and ensure that they are attending the activities, given the fact that they are working. This is especially difficult in the months of May, June, and July, when the city holds popular celebrations, during which children sale goods on the streets alongside their parents. The month of July is even more complicated, because of the school holidays, which often deter the children from attending.

Niños Trabajadores would benefit from additional financial resources, in order to expand the number of children/teenagers supported to over 100 as well as of recreational outlets that could capture the children’s interest and encourage them to attend the Project’s numerous activities.